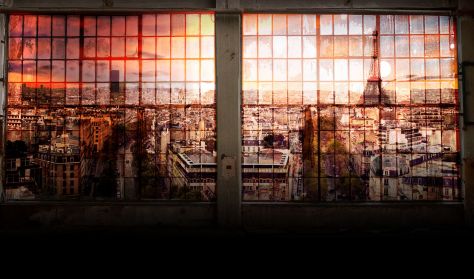 Some operas are legendary. None more so than Puccini's work telling the tale of young bohemians in Paris, in which one of the most beautiful romances in operatic literature begins with a burnt-out candle and a misplaced key.There are also legendary opera productions, such as this one directed by Kálmán Nádasdy. With Gusztáv Oláh's marvellous scenery, it is a genuine example of theatrical history that has remained on the Opera's programme calendar since 1937, with nearly 900 performances to date. Some things are timeless. This wonderful production is unquestionably one of them.

Act I
Rodolfo and Marcello are freezing in their cold attic-room. Despite the poet throwing the manuscript of his play in the fire, the burning love scenes cannot exude enough heat. Colline arrives - with empty hands, as pawnshops are closed on Christmas Eve. Schaunard, however, brings money and delicious food. They divide the money, and eat ravenously. Unexpectedly, the landlord turns up to collect the unsettled rent, but soon they manage to get rid of him, and make their way to the café. However. Rodolfo has to write a poem first, so he follows his three friends later. Hardly has he got down to work when there is a knock at the door: Mimì is standing at the threshold. The wind has blown her candle out. The two hearts soon reconcile, and love starts to blossom in the small attic-room lit by the magical moonlight.
Act II
While a colourful crowd is whirling in the bustling streets, in Cafe Momus the four good friends and Mimì are celebrating Christmas Eve. Marcello's former love, Musetta appears with an elderly gallant, Alcindoro. She immediately seizes the opportunity to regain the painter's affection. With some clever acting, she loses the fooled gallant, and falls into Marcello's arms. As the bohemians have run out of money, when Alcindoro returns to the cafe he finds only the unsettled bill.
Act III
At a foggy and cold dawn near Barriére d'Enfer, in the outskirts of Paris. Mimì is looking for Marcello, who is living with Musetta in the tavern next door. She tells him of her grief: Rodolfo is continuously torturing her with his jealousy, and always suggests that they should separate. Both suffer terribly, and still cannot live without the other. Marcello promises to help them. Mimì walks off, but after some steps she hides behind a tree. Rodolfo steps out of the tavern, and after some hesitation he tells his friend the reason for his strange behaviour. He still passionately loves Mimi, as strongly as at the start, but the girl is fatally ill; she only has a chance to survive if they separate and Mimì finds someone who can provide more adequate living conditions. Mimì's loud weeping reveals her presence and that she has heard everything. Mimì and Rodolfo, both in tears, decide to remain together until the spring, while Musetta and Marcello start one of their usual quarrels.
Act IV
Rodolfo and Marcello are working in the attic-room again, or, rather, they would be working if their memories did not disrupt their imagination. They are both daydreaming about Mimì and Musetta. Schaunard arrives with Colline, and the mood brightens. When the high spirits are at their zenith, Musetta arrives suddenly: Mimì is coming. She has collected all her strength so she could die in the place where she used to be so happy. The two lovers are left alone, and they recall their first encounter. Then the bohemians and Musetta return one by one. When Colline, the last to arrive, closes the door, Mimì – silently, and almost unnoticeably – falls into an eternal sleep.

Please note, that this programme is in Hungarian language and we do not provide translations! Interactive production for children based…