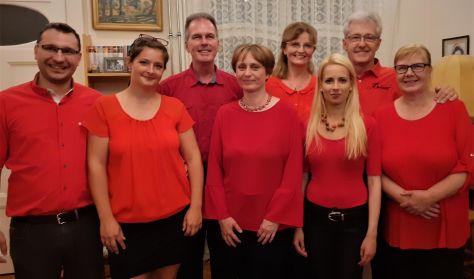 DAY OF OUR CULTURE

Poézis (Poetry), a band that holds the poetry of Hungarian poets in the highest regard, was established in Budapest in 1980. Its purpose and mission is to showcase the richness and variety of 20th century and contemporary Hungarian lyrical works, returning to the ancient performance of poetic works: sung poetry. Poézis performs the poems they select by pouring them into musical format, supporting and elaborating their emotions and content, using their own interpretations and classical music bases with a variety of musical styles. Their repertoire extends to approximately 150 own songs. In addition to the primary importance of the sung lyrics, violins, flutes, cellos, and acoustic guitars also play important roles. The members of the band include artists from the Hungarian State Opera. In the past 40 years, Poézis has given hundreds of concerts in cities across the country, and has released 4 CDs and 6 DVDs. Their programs feature mainly serious lyrical works but also include poems with religious topics, and they even perform playful children’s poems, thus encompassing the best of 120 years of Hungarian poetry.

A celebration of an unparalleled life