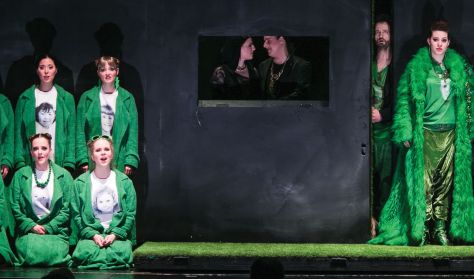 Opera in two parts, in English, with Hungarian surtitles

British music is often faulted for having failed to produce a significant composer for three hundred years after Purcell. If ever a later composer felt it incumbent on himself to look back into England’s past and write a piece based on the work of its most world-famous artistic genius, Shakespeare, it was Benjamin Britten, the first musical talent to be accepted into the international canon after such a long time. With its two dozen soloists and instrumental accompaniment of nearly the same size, A Midsummer Night’s Dream verges on chamber opera. Benjamin Britten’s production is only staged in Hungary quite rarely. The Opera presented it for the first time in 2016, in the Franz Liszt Academy of Music’s Solti Hall, in a joint production – used as an examination performance – with the academy’s solo voice department, with Máté Szabó directing.

Opera in two parts, in a prologue and three acts, in Italian, with Hungarian and English surtitles

Opera in three acts, in English, with Hungarian and English surtitles By: George Gershwin, DuBose and Dorothy Heyward, and Ira…