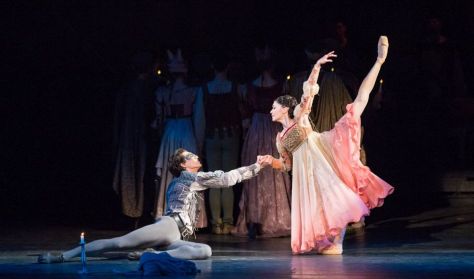 "There's an old, slightly cynical, adage in the theatre that says, when you're out of ideas, produce a Shakespearean work."This is how the ballet's choreographer, László Seregi, put it at the time of the premiere. However, Romeo and Juliet would thoroughly debunk the self-irony in this quip and go on to become one of Hungary's most famous ballet classics. Seregi's spectacular and colourful piece, which made no secret of taking inspiration from Zeffirelli, fundamentally reformed traditional storytelling in ballet by conceiving a full-blooded Renaissance tale for the stage whose living and human subject matter and acute attention to tiny movements, coupled with its superbly crafted situations and picturesque scenery, won over viewers both in Hungary and abroad. The work's lustre has not faded since: its popularity and success have remained unbroken for decades.

It is Shakespeare’s era. The actors of the London Globe Theatre are preparing for the – maybe first – performance of Romeo and Juliet. The enthusiastic audience throngs into the theatre where the morning scene of the Verona marketplace appears gradually on the darkening stage.
Crowds gather the marketplace. A fight breaks out between the relatives and servants of the Capulet and Montague houses. Swords appear, and many are killed in the clash. The Prince of Verona puts an end to the fight.
Preparations for the ball are underway in the kitchen of the Capulet house. Juliet is playing with her nurse. The majestic Lady Capulet gives a present to her daughter and realises that she is not a child any more.
Guests arrive at the ball at the Capulets’. Romeo, Mercutio and Benvolio try to sneak in, but they find themselves in a sinister scene: Mab, queen of the fairies invites them to dance. At the ball Romeo and Juliet fall in love at first sight. Juliet meets Paris, whom her parents intend to be her husband, but calmly refuses his approach. Tybalt recognises the uninvited guests, which makes him furious, but Lord Capulet calms him down. Mercutio’s jokes, instead of relieving Tybalt’s wrath, offend his dignity. When the ball is over the guests leave, and Romeo climbs into the silent garden of the house, where he catches sight of Juliet dreaming on the balcony. The two young lovers happily find each other.

A festive crowd gathers on the main square in Verona: procession of the Virgin Mary, showmen and revelling people. Juliet’s nurse arrives “elegantly” with her young mistress’s message. Romeo follows the nurse to Friar Laurence’s chapel, where the priest marries the two young lovers.
On the marketplace Tybalt is looking for Mercutio to take a revenge for the joke of the previous night. After mutual insults and mocking they begin the swordfight. The master-fencer Tybalt lethally wounds Mercutio who is clowning throughout. He is acting even while dying, but in the last moment he curses both families. Romeo loses control after losing his friend, and kills Tybalt in his wrath. Because of the murder, the Prince exiles Romeo from Verona, but his friends help him flee.

Romeo takes refuge in Friar Laurence’s chapel where Juliet’s message finds him. After their nuptial night Romeo has to flee from the law and leave his wife. Juliet rejects his parents’ will and refuses to marry Paris. She has no choice but to ask for Friar Laurence’s help.
The friar suggests Juliet drinks a drug that will put her into a death-like sleep and wake her up at the right moment. Friar Laurence thinks this is the only way. On returning to her room Juliet seemingly agrees to marry Paris. When left alone, she drinks the drug, and her family finds her in bed unconscious the following morning.
A funeral march takes Juliet on her last journey to the crypt of the Capulet family. The parents and the nurse are broken by sorrow. After the mourners’ departure Romeo arrives and believes his lover to be dead. Seeing no other way out, he chooses to commit suicide. Friar Laurence arrives when Juliet is awakening. The friar realises that he is late and tries to help Juilet, but she – seeing her dead husband – escapes to death too, stabbing herself with the dagger.
The crypt is turned into a cosmic space, the bier rises in the light of the stars, and a multitude of Romeos and Juliets dance around the dead lovers. In the Globe Theatre, Shakespeare’s actors, including Romeo and Juliet, line up in perfect harmony, showing that the performance is over.

Die Frau ohne Schatten (The Woman without a Shadow)