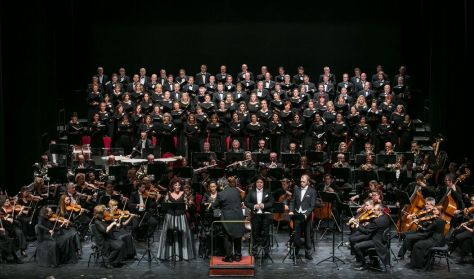 One of the Opera’s loveliest traditions is its musical observation of the All Saints/Day of the Dead holiday period with the funeral mass that has been described as “an opera in ecclesiastical robes”. Perhaps that is why we are the ones who are best equipped to perform it to the highest standard in Hungary. Giuseppe Verdi’s grandiose Requiem is the heartfelt music of an opera composer, written in memory of Rossini and the poet Manzoni. It blends tragedy, pain, hope and consolation in an undeniable operatic style and language characteristic of Verdi, expressed in moments of heart-wrenching intimacy and astounding choral tableaux.

Opera in two parts, three acts, in Italian, with Hungarian and English surtitles