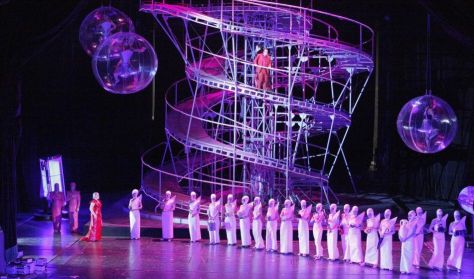 Arrigo Boito is one of the most unique figures in the history of music, not least of all because of his work as a poet: he is responsible for some of the finest librettos ever written for opera (including, for example, Otello). Smitten with Wagner and metaphysics, it's no surprise that he became enamoured with Goethe's Faust, in particularly with the figure of the devil. Mefistofele is his sole completed opera for which he also composed the music. Balázs Kovalik's thrilling production focuses on the mystery of the eternal duel between God against Satan, using powerful imagery to amplify Boito's own personalised poetic treatment of the subject.

"The greatest mystery of all isn't the fact that one is thrust into the infinity of creation and the cosmos, but rather that in one in captivity there, we become aware of thoughts powerful enough to make us doubt that our lives are not simply fleeting moments of nothingness after all." (Béla Hamvas)

Prologue
In timeless eternity, cherubim praise the Lord of The Heavens.
The Spirit of Negation incited rebellion in heaven and was doomed to fail.
Mefistofele criticises the Creator contemptuously and his pampered creation, the self-conceited speck of dust, who regards his own bumptious illusion as reason, and calls himself a human. His unquenchable quest for knowledge, behold, makes Faust miserable and desirous; no science can restrain his feverish dreams, and now he wishes to become superhuman. Mefistofele offers to make a wager with the Lord, in which Faust's soul is at stake. The Forces of Good accept the challenge. Mefistofele listens nauseously to the golden-locked angels' sugary humming and leaves heaven with disgust.
The resounding hymn of the Heavenly Hosts permeates the world.
The greatest of mysteries is not that coincidence threw man somewhere in the middle of the material and the cosmos of stars, but the fact that in this confinement we have aroused ideas in our minds which are grand enough to question that our life is nothing.
Act 1
Tired of his philosophical studies, Faust is watching the colourful bustle of burghers carousing in the marketplace of Frankfurt. Eventually, enthusiasm flares within him: he leaves his bleak cell, and dives into the cheerful throng. But dusk descends, the city stills, and the master and his pupil find themselves alone in the suddenly desolate streets. Only a dark-clad figure follows who interrupts Faust's dreaming of the beauty of spring, and reveals his identity. He calls himself the Spirit of Negation, the creative demolition. He offers worldly bliss to the doctor on the earth if he can be his soul's master - in the other world…
The great libraries of the modern age hold results of invaluable intellectual efforts in millions of volumes. And nothing is more certain than the fact that among the millions of tomes of these works there is none which has a genuine role in the life of mankind. The whole modern culture of humanities, psychology, literature and social sciences, philosophy, moral, aesthetics, philology and theology are entirely and without exception unimplemented, and even unable to be applied, they can never be realised because reality cannot be learnt from these works.
Faust is attracted by beauty borne of simplicity: he is courting Margareta, whose life, burdened with mundane household chores is turned upside down by the cavalier's arrival. While Mefistofele is struggling with her neighbour Martha, the girl is enchanted by the doctor's pseudo-philosophical seduction; he accepts the sleeping draught for her mother so that she can spend a night of passion with Faust.
Act 2
Mefistofele takes Faust to the orgy of a Witches' Sabbath, where the doctor is fascinated by the vibrating light of the incubi. The damned happily greet their king, and listen with delight to his cynical prophecy about the destruction of the world. The wheels are turning, the bones are rattling, and the diabolical dance becomes ever more impetuous when Faust sees a vision of Margareta languishing in prison. His pangs of guilt are drowned out by the euphoric revelries.
People of the modern age, each and every one of them, and especially the so-called culture-makers: moralists, teachers, scholars, priests and statesmen are all convinced that they live an exceptionally exquisite life. Out of their agreeable and highbrow thoughts nothing is implemented neither generally nor personally, it is entirely intellectual illusion which often conceals the life of on ordinary, arrogant, boasting, conceited, shallow, insolent, wicked, and in all cases primitive person.
Margareta is sentenced to death for murdering her child and poisoning her mother. Faust arrives at the death cell to rescue her on her last night, shocked by the sight of a lover who had been driven to insanity. Mefistofele's appearance destroys the forlorn hope of happiness in the distant future: Margareta recognises the Tempter in him with horror. She turns away from her former lover with disgust, and refuses the freedom which he offers to her. She is condemned.
Act 3
We are in utopian Greece, which has vanished in the mists of centuries and is perhaps just the figment of poets' imagination. Mefistofele takes Faust to Helen of Troy to make him forget Margareta. The queen suffers from visions of the war fought for her and bloodshed she caused, but Faust's confession of love is like a balm to her. The sensuous rite of the classic Witches' Sabbath satisfies their passion and raises them above reality.
Life has become pointless, and this pointlessness has permeated all aspects of life and filled every momentum of life. If life is pointless, then the sole objective of a man's life is idle pleasure; the delight of the irresponsible Self.
The deal is not completed yet. Although Faust has enjoyed all the worldly bliss and his last hour on earth is approaching, he has not found the moment when he would have stopped time. Still, at the moment of death he must face his fate; his soul is now carried away by a utopian vision in which he finds the meaning of his whole life.
The modern man lives in the false belief that he himself has to create the spirit of intensive cultivation, set the objectives, create the standards and work out the ideals. The spirit of love in man has known what is to be done since the beginning of time. Forces should not be used to create a new spirit but implement the eternal and universal spirit.

Musical Fun with Little Ones! – musical education for children aged 3 and below

La fanciulla del West (The Girl of the Golden West)