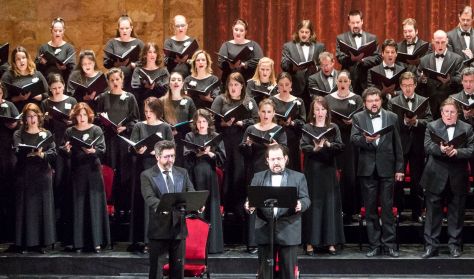 The world literally went crazy for this one-act by Pietro Mascagni when he burst onto the opera scene with his daring work that opened new boundaries for the genre, and which hundreds of others would attempt to imitate. Such was its success that he would never equal it in any of his later works. In one of the chief examples of verismo, Mascagni's protagonists are everyday people who fall victim to their own, unbridled passions.
Captivating and sensual music with gripping dramatic tension. Love, jealousy – and revenge.

Those who have seen Mascagni’s famous one-act Cavalleria rusticana will never forget the Easter Hymn. The tragic story taking place at Easter is a perfect match for Messa di Gloria, which exudes the euphoria of resurrection, but which is above all a Southern Italian mass of innocent faith. It is also of no little relevance that Mascagni himself rehearsed and conducted his opera in Budapest, and as rumour has it, its success here ignited it like a rocket on its way to becoming a worldwide sensation

Opera-mix in two parts, is Hungarian with Hungarian and English surtitles The Barber of Seville / The Marriage of Figaro / The Guilty Mother