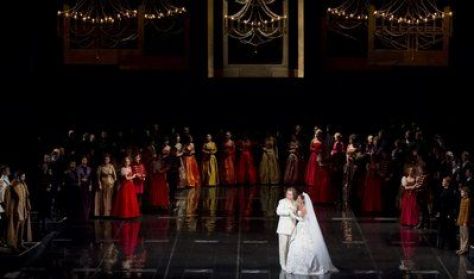 Opera in three acts, in Hungarian, with Hungarian surtitles  more

It was in 1844, at the crest of the reform era, that Ferenc Erkel composed his patriotic opera focussing on one of the most turbulent periods in Hungarian history: the days after the victory over the Turks at Belgrade in 1456. The hero of this work set during the era of the Hunyadis, however, is neither the famous "Turk beater" János Hunyadi nor his younger son King Mátyás, but the older son László, who was treacherously sent to the scaffold while still a young knight. Contemporary viewers received the work enthusiastically, since its scarcely disguised implications reflected the political relationships of their own era; naturally its impact also comes from the music, which was based on Italian and French models, along with with "Verbunkos" traditions.

The first Hungarian-language opera to remain an honoured part of the repertoire without interruption since its premiere, it appeared in a new production at the Hungarian State Opera in 2012.

At the centre of the story stands a young aristocratic girl, Blanche de…