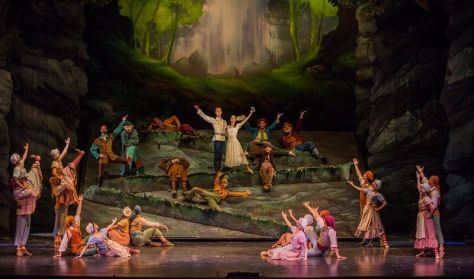 Snow White and The 7 Dwarfs

One of the best-known – all over the world – of the Grimm's fairy tales, Snow White might as well have been created for the ballet stage, and every season since its 2004 premiere it has literally enchanted little ones and grown-ups alike. The seven tumbling dwarfs, the innocent Snow White and the character of the wicked stepmother come to life through Gyula Harangozó Jr.'s choreography, Rita Velich's costume's, Kentaur's sensational set design and marvellous music by Tibor Kocsák, not to mention some brilliant theatrical techniques.

The Erkel Theatre will be welcoming families to the fantastic production in June.

Scene 1
Six dwarfs are pulling a cart. After a long search, they finally find their seventh companion, Dopey. On the cart stands a package the size of a person and covered with a sheet. They pull of the shroud to reveal an enormous book with a picture of an apple on the cover. When they open it, the wicked witch jumps out. The story has begun!

Scene 2
In the king's town, the people are waking up. They diligently clean up the area around the castle and then affectionately greet Snow White, eager to find ways to please her. The huntsman arrives and gives her a dove. They dance with abandon, but the arrival of the queen terrifies the people, who hide from her in alarm, for the stern lady always finds fault with everyone. Snow White greets her sweetly, but her stepmother pushes her away, shoves a broom into her hands and departs. The people cheer the girls up and together they all merrily set themselves to work. This includes polishing the queen's enormous mirror. When the wicked stepmother returns, she's still not satisfied, and is just about to punish poor Snow White, when in walks the prince. He has brought a gift for the queen, and starts to dance with her. As he does so, however, he catches a glimpse of Snow White and is immediately enchanted by the girl's beauty. During the dance, he focuses his attention on the girl until the stepmother notices and invites him into the castle as a diversion.

Scene 3
In a dark hall of the castle, Snow White is overcome with despair. She also feels tenderness for the prince, but she wouldn't be allowed to dance with him, and so she places the lad's hat on her broomstick and breaks out into a dance with that. The prince notices, they start to dance together, and they fall in love with each other.

Scene 4
The queen stares at herself in the magical mirror, but suddenly Snow White appears in the reflection. The vain woman bursts into a rage and summons the huntsman. She mesmerises the man with her beauty and shows him a dagger: he must use it to slay Snow White. The huntsman at first protests, recoiling from the assignment, but eventually he takes the dagger.

Scene 5
In the forest, the huntsman clutches the knife, brooding over what to do. Finally, he seeks out Snow White and invites her to go hunting butterflies with him. They wind up deeper and deeper in the forest, as the girl chases the butterflies, and the despairing huntsman hesitates. Eventually, he abandons Snow White without saying a word, Meanwhile, it's been growing dark. Snow White suddenly realises that she's lost and alone.

Scene 6
The seven dwarfs are getting ready for work. Dopey – true to form – falls behind the others and then takes a seat in a rolling wagon to catch up with his companions. Eventually they reach the mine. Working deep under the earth, they don't even guess that Snow Work is wandering in the forest over their heads. Everyone works diligently, except for Dopey, who is constantly underfoot. When the day's work is done, they head for home.

Scene 7
Snow White races through the forest in terror. The seven dwarfs also cross paths with her, but everyone evades everyone else. The huntsman returns to search for the girl, but doesn't find her, so he heads back to the town.

Scene 8
Snow White arrives at the empty house of the dwarfs. Famished and thirsty, she tastes the soup she finds on the stove, takes a big gulp from one of the glasses and then lies down and sleeps. The dwarfs return home. They quickly realise that someone has been in the house and, shortly thereafter, the fact that the stranger is sleeping in their bedroom. Deeply afraid, they nevertheless send Dopey, the youngest among them, to spy out who it it. Snow White wakes up, and is at first frightened by the strange characters. Finally, however, they make friends. The dwarfs adopt Snow White, except for Grumpy, who wants to send the girl away. The others plead with him until he relents. Snow White immediately sets about cleaning the house. Together they all set the table and have supper, and then the dwarfs take turns entertaining the girl with dancing and magic tricks.

Scene 9
The queen's servants fan and dress her, but she irately sends them off. She looks at herself in the magical mirror, only to be confronted once again by the sight of Snow White, as she putters about the dwarfs' house. She falls into another rage and calls forth her assistants, the three little monsters. They prepare a poisonous brew and transform the queen into an ugly old hag. She dips the apple into the concoction and heads off in the direction of the dwarfs' house. The monsters celebrate their wicked deed with a dance.

Scene 10
Snow White rouses the dwarfs, but Sleepy is difficult to wake. One after the other, they wash themselves, but Grumpy takes exception to the idea of getting wet. He protests until he falls into the tub. Snow White distributes the food, and the dwarfs head off for the mine. No sooner have than they left than the queen, still disguised as a hag, arrives. Snow White kindly offers her a seat and brings her water. The grateful old crone offers her the apple. Snow White, suspecting nothing, bites into the poisoned fruit and collapses. At that moment, Dopey returns home, as he's forgotten his favourite toy, a bicycle horn. The crone hides, and while Dopey rushes off to tell the others, she flees from the house. The dwarfs follower her trail and pursue her until she plummets down a deep gorge.

Scene 11
The huntsman, along with his two companions, are still searching for Snow White in the forest. He blows his horn, but the only one to appear is the prince, who is likewise searching for the girl. The huntsman admits what happened. Just then, the dwarfs arrive bearing a glass coffin. Even like this, Snow White is still so beautiful that the prince kisses her. The kiss breaks the spell: the girl returns to life and everyone celebrates joyfully. Finally, the monsters push in the enormous book that was seen at the beginning of the performance. The wicked queen is lurking inside of it. With a single motion, Dopey shuts the book, trapping the stepmother so that she can never again disturb the lovers.