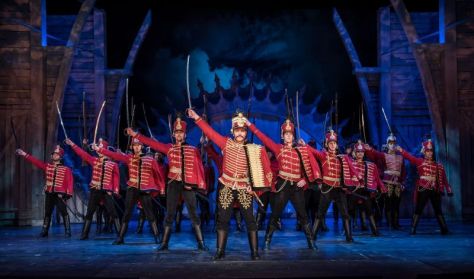 Singspiel in two parts, in Hungarian, with Hungarian and English surtitles

There is no life without stories. Zoltán Kodály's Háry János, however, is one of the greatest dreamers to ever take the musical stage: “Everything he says is reality interwoven with fantasy, illuminated with the genius of folk tales,” declared the composer. The marvellous adventures of the rascally veteran from Nagyabony combined with Hungarian folk songs scored for full orchestra have been enchanting audiences since 1926. Discussing the production that has run at the Erkel Theatre since 2013, director Attila Vidnyánszky said, “Háry János is about how, amidst the centuries of failures and defeats of Hungarian history, to find in our dreams a salve for these wounds.”

Prologue
In the village of Nagyabony, the regulars gather at the inn to hear the aged veteran János Háry tell his stories. The judge, the student and a few farmers sit down to sip wine and listen to the old man's stories, which many of them take with more than one pinch of salt.

Adventure I: Háry stands guard on the Austrian frontier. The Austrian border guard refuses to allow anyone to cross over from the other side, including Marie Louise, the daughter of Emperor Franz, and her retinue – with Baron Ebelasztin among them, as well as the coachman Marci, driver of the imperial coach. Háry, together with the other Hungarians, pushes the guardhouse into Austrian territory.

Adventure II: In Vienna's Burghof, Háry succeeds in taming Lucifer, the most unbreakable steed in the imperial stables. As a reward, Marie Louise gives him a violet. Baron Ebelasztin, stricken with jealousy, exercises the authority given to him by Napoleon to present the Emperor of Austria with a declaration of war.

Adventure III: Hussars are encamped below Milan castle. Napoleon attacks, but his forces fall before a single wave of Háry's sword. Napoleon himself is taken prisoner. Marie Louise arrives: she wants Háry for her husband instead of Napoleon. Örzse appears, and is unwilling to part with her betrothed.

Adventure IV: In the Viennese court, Háry and Marie Louise are getting ready for their wedding. The little princes tell Háry what they've learned in school. The court marches in. Háry doesn't want Marie Louise's hand or a princely title. Instead he wants to return to Nagyabony, the village of his birth, together with Örzse.

Epilogue: in the inn at Nagyabony, Háry reaches the end of his story, which relates how the lovers held a big wedding and lived happily together until poor Örzse passed away. This meant that no witness remained who could verify Háry's tale. But none was needed, either, for “no one on earth is as valiant/as our Uncle Háry was!”
Háry János    Zoltán Nagy
Old Háry    László Csurka
Örzse, Háry János    Gabriella Balga
Emperor Franz / Judge    András Kőrösi
The Empress    Mária Farkasréti
Napoleon / The Innkeeper    András Hábetler
Marie Louise    Éva Várhelyi
Baron Ebelasztin    János Szerekován
Old Marci    Géza Gábor
General Krucifix    Balázs Csémy
A Hungarian Guard    Richárd Hoffmann
Burkus, a guard    Tamás Vass
A Student    Tamás Szmerek

Please note that guided tours are currently offered in Hungarian only. Please check back for availability in English later. Get to know the brand-new complex of the Opera at first hand. On 25 October 2021, the Eiffel Art Studios of the Hungarian State Opera was officially inaugurated. Now, visitors are given the chance to explore its interior spaces and workshops with the help of guided tours.

Beginning with 15 March 2022, at the completely restored Opera House guided tours are available again for fans of architecture…