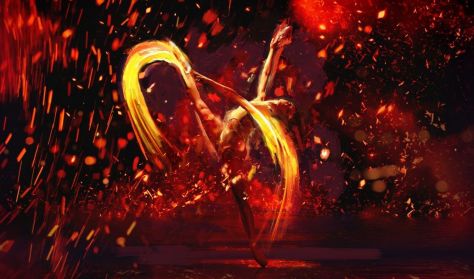 Stravinsky, Gluck, Mozart… Three influential composers meet through choreographies created to their music in this programme for fans of classical music and ballet. Firebirds is a recent production focusing on female instincts with an ironic, grotesque undertone created to the music of Stravinsky by Marianna Venekei. Thierry Malandain’s Don Juan presenting an old topic from a new point of view with music by Gluck is also a recent addition to the company’s repertoire, whereas two audience favourites, Petite mort and Six Dances by Jiří Kylián accompanied by Mozart’s melodies also return to the stage.

“Women innately find their own amorous nourishment like birds find seeds or fish. Driven by their instincts, they hover over lakes, river, seas and plains and then after complex swirling and circling manoeuvres, suddenly swoop down all at once and strike. At such times, their instincts and eyesight are both made marvellously evident. They very rarely miss, and it only infrequently occurs that the victim is stronger or more clever and able to slip out of their beaks like a tadpole from a gull’s bill. Then they squawk, just like a seagull, and soar upwards, hovering, circling, tirelessly and alertly.” Quoting this slightly ironic passage from Sándor Márai is Marianna Venekei, the choreographer of the new ballet Firebirds, based on the wonderful music of Igor Stravinsky.
At the beginning of the preformance the quote from Sándor Márai’s Füves könyv is read by actor László Sinkó.

Don Juan: a modern treatment of an old subject: the man living in the golden age of Spain, that is, the 16th century, whose aim was to seduce every woman he found. Also considered a character in the commedia dell’arte, he is a freethinker and melancholy philanderer who was so relentless at pursuing his quarry that his name became synonymous with the word “womaniser”. And there’s something about this achievement, one has to admit, to admire. “I like the idea of having a character who is seeking the archetypal “Woman” herself in women. Or perhaps he is seeking himself. For me, he is a mystical figure, who instead of finding satisfaction in what is special and certain, always needs more and then even more. He is a man of action who lives off of those moments he spends beside the bodies of others,” stated choreographer Thierry Malandain. Don Juan is his first collaboration with the Hungarian National Ballet.
Thierry Malandain is represented by Stepping Grounds Arts/Culture Management. www.steppinggrounds.com

Jiří Kylián has always admired Mozart; over the course of his career, he has created a number of choreographed to the composer's music, including one from 1991 that paid homage to the genius of the 200th anniversary of his death. Featured in this uniquely atmospheric ballet are six women, six men and six swords. In addition to the weapons, other props include black, baroque-style clothing and bizarre crinolines. The symbolic image in the dance piece presents a world where aggression, sexuality, silence, music, vulnerability, interdependence and eternal human beauty exist together in their own sense of poetry. This ballet from the choreographer's mature period is characterised by daring visuals, superb dance performances, elegance and style and has featured in the Hungarian National Ballet's repertoire since May 2013.

In Kylián's ballet, Mozartian playfulness and absurd reality are transplanted into the language of movement. It was not a story that he set out to create, but rather a dance piece constructed out of the absurd situations encountered by heroes in powdered wigs who sometimes act irrationally and awkwardly: the very dictionary definition of the word "burlesque". From the first moment, the eight dancers take the stage like they are stepping out of a wax museum from Mozart's own era, and then the innovative freshness and dizzying dynamic of the choreography makes them ever more modern: timeless heroes of Kylián's absurd creative world.

Opera in two parts, in a prologue and three acts, in Italian, with Hungarian and English surtitles

Die Entführung aus dem Serail (The Abduction from the Seraglio)

Singspiel in two acts, in Hungarian, with Hungarian and English surtitles

Opera in five acts, in Italian, with Hungarian and English surtitles