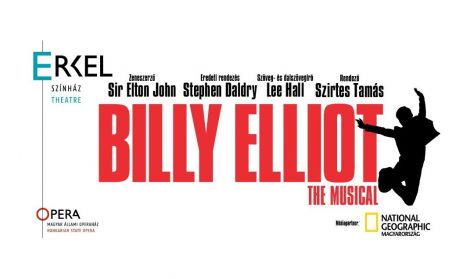 It's 1984. In England's mining towns, life is in upheaval: it is the time of the strikes. Eleven-year-old Billy Elliot lives in one of these towns. His father and older brother have joined the picket line to fight for a better living. His mother is dead. Following in the family tradition, the boy attends boxing lessons, but this violent sport doesn't suit him much. One day he happens upon the girls at their ballet class and is smitten by the dancing.
Will a young boy's artistic talent be able to bring the family and the community together? Will Billy succeed in making his dreams come true?
This musical adaptation which has delighted audiences around the world is a collaboration between Sir Elton John and the winning team behind the original 2000 feature film. We are presenting it in a non-replica production directed by Tamás Szirtes, and with choreography by Ákos Tihanyi. We believe that music and dance are for everyone, and that includes ballet.

This production of Billy Elliot – The Musical has been developed with special permission from Music Theatre International [MTI, 421 West 54th Street, New York, New York 10019 – tel.: (1) 212 541 4684, www.mtishows.com], using material it has made available.

The children soloists featured in the Opera’s production have been trained and prepared in partnership with the Madách Dance School and the Hungarian Dance Academy.

In County Durham, the 1984-85 coal miner's strike is just beginning. Motherless eleven-year-old Billy is required to stay behind after his boxing class and finds his way into a ballet class run by Mrs. Wilkinson. He is the only boy but becomes attracted to the grace of the dance. The secret is easily kept initially, as the only person home at the time is his grandmother. She reveals her abusive relationship with her dead husband and that she, too, loved to dance, which made everything all right.
While his brother, father and neighbors are on strike and clash with riot police, Billy continues to take dance lessons, keeping it a secret from his family.
Eventually, Mr. Elliot discovers Billy in the ballet class and forbids him from attending the lessons. Mrs. Wilkinson recognizes Billy's talent and privately suggests that he should audition for the Royal Ballet School in London. To prepare for the audition, she offers him free private lessons. Billy is not sure what he wants to do, so he visits his best friend, Michael, for advice. He finds Michael wearing a dress, who then persuades Billy to have fun with him by dressing up in woman's clothing and disdaining the restrictive inhibitions of their working class community.
Billy arrives for his first private ballet lesson, bringing with him things to inspire a special dance for the audition. He begins learning from, and bonding with, Mrs. Wilkinson while he develops an impressive routine for his audition. Mrs. Wilkinson's daughter, Debbie, tries to discourage Billy because she has a crush on him. Meanwhile, Billy's father and brother, Tony, are engaged in daily battles with riot police that often turn bloody. They struggle to support the family with very little in strike and union pay, a difficult task that goes on for nearly a year.
When the day of the Royal Ballet School audition comes, police storm through the village and injure Tony. Because Billy had not come to the miner's hall to get picked up by Mrs. Wilkinson for the audition, she goes to the Elliot's home. There, Billy's family and some members of the community have gathered. She is forced to reveal that she has been teaching Billy ballet in preparation for this very day. This news upsets Billy's father and Tony, who get in an argument with Mrs. Wilkinson. Tony tries to force Billy to dance on the table in front of everyone. The police approach and, as everyone escapes, Billy calls out to his father, saying that his mother would have let him dance, but his father refuses to accept that, retorting, "Your Mam's dead!". Billy goes into a rage and, for nearly a year, stays away from anything related to ballet.

Six months later at the miner's annual Christmas show, the children put on a show disparaging Prime Minister Margaret Thatcher, who is seen as the antagonist by the coal miners. Billy's father gets drunk and sings an old folk song that elicits memories of his deceased wife, and the usually stoic man leaves in tears. Left alone with Billy in the Community Centre, Michael reveals he has feelings for him, but Billy explains that the fact that he likes ballet does not mean that he is gay. Michael gives him a kiss on the cheek and tries to get Billy to show him some dancing, but Billy is sad and just tells him to leave. Michael departs but leaves a music player running. Billy feels like dancing for the first time since the day of the aborted audition and dances while dreaming of being a grown-up dancer. Unknown to Billy, his father arrives and watches him dance. Overcome with emotion, his father goes to Mrs. Wilkinson's house to discuss Billy's prospects as a dancer. She confirms Billy's talent, but is not sure whether or not he would get into the Royal Ballet School. Mrs. Wilkinson offers to help pay for the trip to London for the audition, but Mr. Elliot refuses. He leaves, questioning his working-class pride and the future mining has for his boys.
Mr. Elliot decides that the only way to help Billy is to return to work. When Tony sees his father cross the picket line, he becomes infuriated. The two argue over what is more important: unity of the miners or helping Billy achieve his dream. The argument eventually comes to blows, and Billy is hit accidentally. One of the miners chastises them for fighting and says that the important thing is looking after the child. One by one, the miners give money to help pay for the trip to the audition, but Billy still does not have enough for the bus fare to London. A strike-breaker arrives and offers him hundreds of pounds. An enraged Tony attempts to shun his donation, but no one else speaks up in his support. Now drained of hope, Tony dismally ponders whether there's a point for anything anymore and runs off.
Billy and his father arrive at the Royal Ballet School for the audition. While Mr. Elliot waits outside, an upper-crust Londoner highlights the contrast between the Elliots and the families of the other applicants. Mr. Elliot meets a dancer with a thick Northern accent. The dancer confesses that his father does not support his ballet career. He sharply advises Mr. Elliot to "get behind" his boy. Billy nervously finishes the audition with a sinking feeling that he did not do well. As he packs his gear, he lets that emotion overwhelm him and he punches another dancer who was trying to comfort him. The audition committee reminds Billy of the strict standards of the school. They have received an enthusiastic letter from Mrs. Wilkinson that explains Billy's background and situation, and they ask him to describe what it feels like when he dances. Billy responds with a heartfelt declaration of his passion.
Back in Durham, the Elliots resume life, but times are tough and the miners are running a soup kitchen to ensure everyone is fed. Eventually, Billy receives a letter from the school and – overwhelmed and fearful, knowing that it heralds the end of the life he has known – he informs his family that he wasn't accepted. Tony retrieves the letter from the waste bin and discovers that his brother was not telling the truth. At the same time, the miners' union has caved in; they lost the strike. Billy visits Mrs. Wilkinson at the dance class to thank her for everything she did to help him. Debbie is sad that Billy will be leaving.
Billy packs his things for the trip to the school and says goodbye to the soon-to-be-unemployed miners, who are returning unhappily to work. Billy says goodbye to his dead mother, who often visits him in his imagination. Michael arrives to say goodbye, and Billy gives him a kiss on the cheek. Billy takes his suitcase and walks out to his future alone. The entire cast comes out on stage and calls Billy back to celebrate the bright future ahead of him.

Opera in two acts, in Italian, with Hungarian and English surtitles

At the centre of the story stands a young aristocratic girl, Blanche de…

Snow White and The 7 Dwarfs