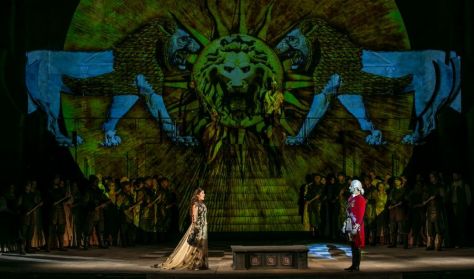 The combination of Mozart's marvellous music and Schikaneder's coming-of-age storyline has something to tell us at every stage of life. No matter if you are discovering or rediscovering the work as a young lover, a parent, or with the wisdom of old age, this blend of the ethereal and riveting entertainment is always thrilling to watch. Miklós Szinetár's production is suffused with the opera's rich world of symbolism, with the sun always rising at the end.

Prologue:
The Queen of the Night has lost all of her power. Following her husband's death, all of the land and property went to her and her daughter, Pamina, with the exception of one object: the disk of the sun, which the will entrusted to Sarastro. The Queen does not accept this, and has begun to fight for the return of the sun-disk.

Act I
Tamino is being pursued by a monster. The youth faints. Three ladies rush to his aid and slay the serpent. Each of the three place a spell on the handsome, but unconscious, young man. They must bring news of this development to their mistress, the Queen of the Night. However, all three want to be the one to stay behind to keep watch over the insensate young man. They argue, but then all end up leaving together.
Tamino awakes, and sees a strange human shape nearby. It is Papageno, the bird-catcher who receives wine and food from the ladies in exchange for his birds, and who also lives a merry life, with only one difficulty: he hasn't managed to find a wife. They start a conversation: Papageno pretends that he was the one who killed the monster. The returning three ladies hear him say this, and punish the boaster: from now on his birds will earn him only water to drink and stones to eat, and they also fasten a lock to his mouth. The ladies reveal that they were the ones who saved Tamino, to whom the Queen of the Night has sent a picture of her daughter, Pamina. Tamino falls instantly in love with the image. The girl, however, is the captive of a “wicked demon” named Sarastro, the ladies explain.
Accompanied by thunder and lightning, the Queen herself now arrives to inform Tamino that if he frees Pamina, the girl will be his. The Queen departs. The ladies remove the lock from Papageno's mouth and give Tamino a gift from their mistress: a flute whose bewitching music brings happiness to those who hear it. Papageno has had enough and is ready to move on, but the ladies stop him: at the Queen's command he must stand with Tamino and accompany him into Sarastro's realm. Papageno is quite upset to receive this news, and so in order to mollify him somewhat, the ladies give him a glockenspiel. Tamino and the bird-catcher will be guided on their way by three little boy-spirits.
Sarastro's palace: Papageno finds Pamina, who is at that moment attempting to escape. He tells her the whole story about how he and Tamino have come to rescue her. They set off in search of Tamino.
Meanwhile, the young man has requested that the three boys help him find his love. “Be steadfast, be patient... be a man,” comes the response. He's amazed at where the boys have taken him: instead of a formidable castle, he is confronted with a magnificent temple. Three times, he forcefully demands to be admitted. Only on the third attempt is he successful: an old priest asks him: “What do you seek in this holy place?” Tamino answers that he seeks “Love and Virtue”. The priest sees that Tamino is in fact being manipulated by the Queen of the Night and her thirst for vengeance. He explains that Sarastro is not a wicked sorcerer and that the Queen of the Night is no pitiable bereft mother. “O endless night!” Tamino laments, “When will you vanish? When shall my eyes see light?” The priest reveals to him only that Pamina is alive. Tamino begins to play the flute in the hope that its sound will bring forth his love. Even the animals of the forest venture forth at the sound of the wondrous music, but the girl does not appear.
At the same time, Pamino and Papageno are searching for Tamino, but instead are discovered by Monostatos, Sarastro's repulsive servant, who is hopelessly in love with Pamina. Papageno begins to play on his glockenspiel, hypnotising Monostatos and his entranced slaves into sedately listening to the music and then, completely enchanted, returning to their business. At this point, Sarastro enters with his attendants. Pamina admits to Sarastro that she had indeed attempted to escape, as Monostatos had been plaguing her with his undesired attentions. Sarastro is not angry with her, but he will not permit the girl to return to her mother, either, as that would cost Pamina her happiness. Sarastro professes that the Queen of the Night has overstepped her bounds. Monostatos leads in Tamino, who has been taken prisoner. The smitten couple behold each other for the first time. The servant expects a reward for his cunning, and is given one: twenty-seven lashes on the soles of his feet... At Sarastro's command, Tamino and Papageno are led to the Temple of Ordeals, where their souls will be purified.

Die Entführung aus dem Serail (The Abduction from the Seraglio)

Singspiel in two acts, in Hungarian, with Hungarian and English surtitles