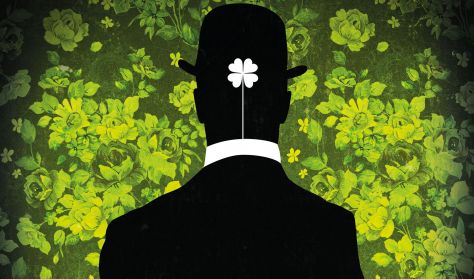 What happens when a singing circle operating according to classical middle-class values is forced to accept a talented but depraved and penniless musician? Primeval, genuine emotions break the through bars of false convention. Or do they? This is the theme of The Tenor, the most celebrated Hungarian comic opera of the 1930s.

Ernő Dohnányi and Ernő Góth's uproarious comedy is given a new look – recalling the colourful worlds of operetta and Bollywood and turning the performance into a dream-like carousel. Our young artists revel in these exquisite character roles under the expert direction of András Almási-Tóth.

Act I
The town's celebrated vocal ensemble is in trouble because the quartet's first tenor has died unexpectedly, and thus the quartet, the winner of numerous prizes, will not be able to take part in the prince’s singing competition eight days later. There is only one – rather embarrassing – solution: inviting the town's destitute and drunken flautist, Schippel. The musician even appears at the house of the quartet's leader, Hicketier, and amazes everyone with his audition; the gentlemen, however, take issue with his unpredictable behaviour, which soon leads to an argument. The young man storms out in a rage, but at that moment the prince appears unexpectedly, having suffered a riding accident outside the house; he is tended to by Thekla, the host’s charming daughter. As he departs, the young sovereign admonishes the abashed citizens to achieve another triumph at the singing competition, and also promises Thekla a secret rendezvous for later that night. The members of the quartet, now reduced to a trio, are forced to accept that they need to placate Schippel if they want to take part in the competition. While Hicketier and Wolke go to the neighbouring pub to entice the new member back, Krey, on Woke’s advice, remains behind to profess his love for Thekla. The girl pretends not to understand what the hapless suitor is muttering about, an embarrassing situation that is ended by the return of Schippel and the delegation. The flautist immediately returns to form and begins to woo the Hicketier girl, even winning himself an invitation to lunch.
Act II
With night descending, the prince sneaks into the garden of the house and calls Thekla to the window. His courting is disturbed by the sounds of the quartet rehearsing in high spirits, so he lures the girl down from the balcony and leaves with her. After the practice, the members of the quartet say goodbye to each other, and Hicketier returns to the house; Wolke and Krey remain in the garden to discuss the results of Krey’s declaration of love. They are surprised to find Schippel is roaming among the trees; they hide to see what he is up to. Unable to sleep The young man is wandering about pondering the unexpected events of the day: he sees an opportunity to rise in society and also feels that he has fallen in love with Thekla. He attempts to climb up to the girl’s room, but Krey and Wolke prevent him from doing so. A fight breaks out, and then Hicketier and his wife Jenny rush out of the house and join the loud tumult. The two parents grow even angrier when Schippel states that if Hicketier does not give him his daughter to marry, he will not take part in the competition. The noisy squabble is interrupted by the arrival of the prince and Thekla. In an offhand manner, the princely lord infors the puzzled company that he only wanted to express his gratitude to the young lady of the house for her kind attendance that afternoon, and then bids everyone a good night and leaves. The befuddled burgher thank their liege profusely, but Schippel states that he would never marry the “prince’s strumpet”. The row begins again, and eventually Schippel challenges Krey, who attempts to defend the girl’s honour, to a duel. In the end, they agree to postpone the settlement of this affair of honour until after the competition, and thus all obstacles have been removed from competing for the prize.
Act III
Dawn at a clearing in the forest. Thekla is preparing for her last rendezvous with the prince. She informs the nobleman of her decision: she does not wish to continue this socially unacceptable secret love affair. They part with heavy hearts, and assure each other of their mutual and eternal love, sealing their final separation with one last kiss. The quartet has won the first prize again, and now the duel can begin. Half-dead of fear, Krey is dragged to the site by Hicketier and Wolke. Hicketier irately informs him that in view of recent events, he finds Schippel superior to him and more suitable as a son-in-law as well. Schippel approaches the site of the duel, likewise reluctant to be shot to death. After long contemplation, he decides to flee; but it is too late, and his seconds, who have just arrived, place him before Krey. The two tenors raise their pistols and aim at each other, but Krey faints dead away from terror before the first shot is fired. This turns out to be the ideal solution: they have fulfilled the rules of chivalry, and no one has been hurt! Amidst friendly handshakes, Schippel is accepted as a regular member of the quartet and they continue to sing together happily.

The treasure of the Rhine (Das Rheingold)

Opera in one act, in German, with Hungarian and English subtitles