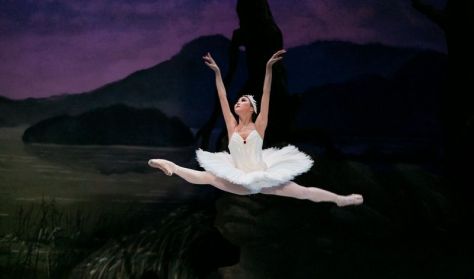 Tchaikovsky’s first ballet is the most beloved classical piece in ballet literature: while the hardships of love between a prince forced into marriage and a maiden enchanted into the form of a swan is one of the most charming Russian romantic fairy tales, the piece nevertheless failed at its original premiere in 1877. The choreographers creating the premiere were simply not equal to Tchaikovsky’s genius. It was Marius Petipa's and Lev Ivanov's choreography that brought fame for the piece and established a tradition, and most companies to this day still dance the piece following this blueprint. Rudi van Dantzig and Toer van Schayk revised this classic creative work in 1988.

Act I
Siegfried’s birthday party in the castle garden To celebrate Siegfried’s eighteenth birthday, Alexander and the courtiers and neighbours have organized a surprise party for him in the garden of the castle. The Prince’s tutor Von Rasposen is irritated by Siegfried and Alexander’s friendly relationship with the local peasants. The festivities are interrupted by the arrival of the Queen, the Prince’s mother. She presents her son with a ring reminding him of his future role as successor to the throne: he will soon have to choose a bride. Siegfried is downcast at the prospect of his youth drawing to a close. As darkness falls he and Alexander ponder on the future. They decide to explore the surrounding forest.

Act II
The meeting with Odette Lost in the forest, Siegfried and Alexander arrive at the banks of a great lake. A huge circling bird of prey fills them with fear: it is as if the form of Von Rasposen is still spying on them. The bird of prey – in fact the wicked magician Von Rothbart – summons a swan out of the dark lake, which takes on human form. In Odette, the Swan Queen, and her retinue of swan maidens, Siegfried believes he has found the realization of his ideal of sincerity and simplicity. Surrounded by these pure shapes he is overcome with joy. He swears to remain forever true to his ideals.

Act III
The betrayal During a ball at the castle several brides-in-waiting are presented to Siegfried. But to the amazement of the guests, and to his mother’s alarm, Siegfried refuses to make a choice; all the pomp and splendour contrast starkly with the purity of the vision experienced at the lakeside. Von Rasposen announces the last guests: Von Rothbart, his daughter Odile and their retinue. Siegfried imagines that the Black Swan, Odile, is a manifestation of the White Swan Queen, Odette, but still he wavers. Von Rothbart and Odile blind him with a sensual display of dazzling virtuosity. To Alexander’s dismay Siegfried yields and offers Odile the ring. Too late he realizes that he has betrayed his ideal, Odette. Stricken, he flees back to the lake in despair.

Act IV
The reconciliation with Odette Disillusioned and betrayed, Odette and the swan maidens tarry by the moonlit lakeside, where Siegfried finds them. Odette forgives Siegfried and attempts to comfort him, telling him that he must learn to live with reality. Von Rothbart tries to drive Siegfried away from the lake, but although Siegfried manages to defy him, he drowns in the waters. Von Rasposen abandons his futile search for the Prince, while Alexander discovers the lifeless body of his friend. In Alexander, Siegfried’s ideals will live on.